Blog
You are here: Home / Blog / All Topics / Calgary dog recovering after being hit by car that didn’t stop 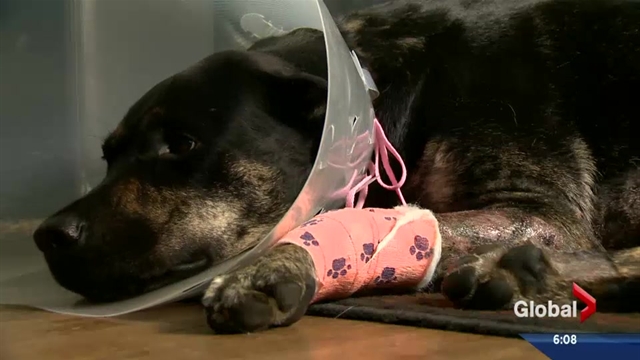 Calgary dog in hit and run

A Calgary family is feeling lucky after their family pet was hit by a vehicle and dragged down the street Tuesday.

Bugsey, a two-year-old Doberman cross, was struck while being loaded into her dog walker’s vehicle.

“She was loading Bugsey into the back and a little bit of her tail end was sticking out,” explains owner, Stefani MacKichan.

“A car came ripping around a corner and she got caught under the front left wheel.”

“It clipped her back end and dragged her down,” Mulyk explains. “I saw her laying there under the tire and I thought, ‘Oh my God she’s dead.’”

According to Dimitri Tsoumpas, who witnessed the incident, the driver of the vehicle got out but then drove away without helping Bugsey.

“He stopped and got out to kind of see what had happened,” says Tsoumpas. “I think he might have gotten a clue and popped back in and took off.”

“The basic thing to do is stop and see if you can help,” says MacKichan.

The Calgary Police Service says it tracked down the driver who says he stopped and didn’t see the dog.

According to police the driver also says there was nobody around and that’s why he drove away.

Police also say that there are conflicting reports over whether the dog darted out into traffic.

“It was unbelievable;you want to see someone take ownership for what happened, I think the negligence is a little bit shocking.”

Meanwhile, the Mackichan family estimates that Bugsey will require thousands of dollars worth of veterinary care to fully recover.

The driver of the vehicle is not being charged.