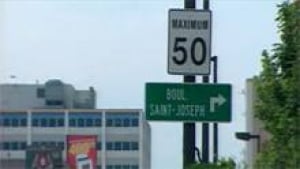 Montreal announced Monday that speed limits on residential streets will be reduced to 40 km/h within the year. ((CBC))

Montreal and Quebec’s transportation ministry have reached a deal to allow the city to reduce speed limits on its streets to 40 km/h from 50.

The speed reduction has been in the works since the city asked the ministry for permission to lower the speed limit in 2006.

The city released a statement on Monday, confirming that Quebec Transport Minister Julie Boulet finally gave permission for the speed change once the city and the province worked out how the new speed limit would be phased in.

Limits on streets in residential neighbourhoods would drop to 40 km/h, while major arteries would stay at 50 km/h.

The city said it would try to save money on signage by posting the speed change by sector. The city would put signs at entry points in each sector instead of street by street.

City spokesman Darren Becker said the main reason for the change is safety.

“There’s statistical data that proves that by reducing the speed limit by just 10 kilometres an hour, you can significantly reduce the chances of serious injury and death,” Becker said. He added that increased awareness and policing have also brought the number of traffic injuries down significantly.

The city said new limits should be in place sometime next summer.

Pedestrian killed in southwest Calgary crash ‘He was like an angel’ — Family mourns Calgary boy killed in dirt-bike...
Scroll to top