Blog
You are here: Home / Blog / All Topics / Slowing Down Will Get You Through a Traffic Jam Faster
Article borrowed from The Wall Street Journal
Written by
JO CRAVEN MCGINTY

The next time you spend an hour in stop-and-go traffic, go ahead—blame the drivers. Chances are, it’s their fault. And maybe yours, too.

In effect, they leave no room to react. When something unexpected occurs, it leads to sudden braking, and what might have been a manageable slowdown becomes a miserable crawl or, worse, traffic grinds to a standstill.

Once the flow of traffic is disrupted, the shock wave ripples backward, with driver after driver braking. Instead of progressing smoothly, traffic rapidly queues.

“Everyone is selfish and wants maximal travel time versus optimal time for everyone,” said Hesham Rakha, a professor of civil and environmental engineering at Virginia Tech. “By being selfish, you make the system worse.”

The Federal Highway Administration estimates that 40% of all congestion nationwide can be attributed to recurring bottlenecks. The problem cost the country $78 billion last year in wasted time and fuel, according to INRIX, a company that studies the economic and environmental costs of congestion.

Bottlenecks can’t be entirely eliminated, but they can be minimized. Solutions include variable speed limits that change in response to congestion, metered on-ramps that use traffic signals to gradually feed drivers onto freeways, and zipper merges which, when a lane is about to end, instruct drivers to use all lanes until a designated point then take turns merging.

Essentially, the approaches direct drivers to go slower in order to go faster.

When traffic begins to slow, capacity initially increases because the density makes up for the reduced speed, and more of the tightly packed vehicles pass through. The benefit peaks at around 45 mph with about 2,200 vehicles per lane per hour. But at maximum volume, the system is vulnerable.

“When you get to that level, it doesn’t take much to mess things up,” Mr. Arseneau said. “Any disruption is likely to break down traffic.” 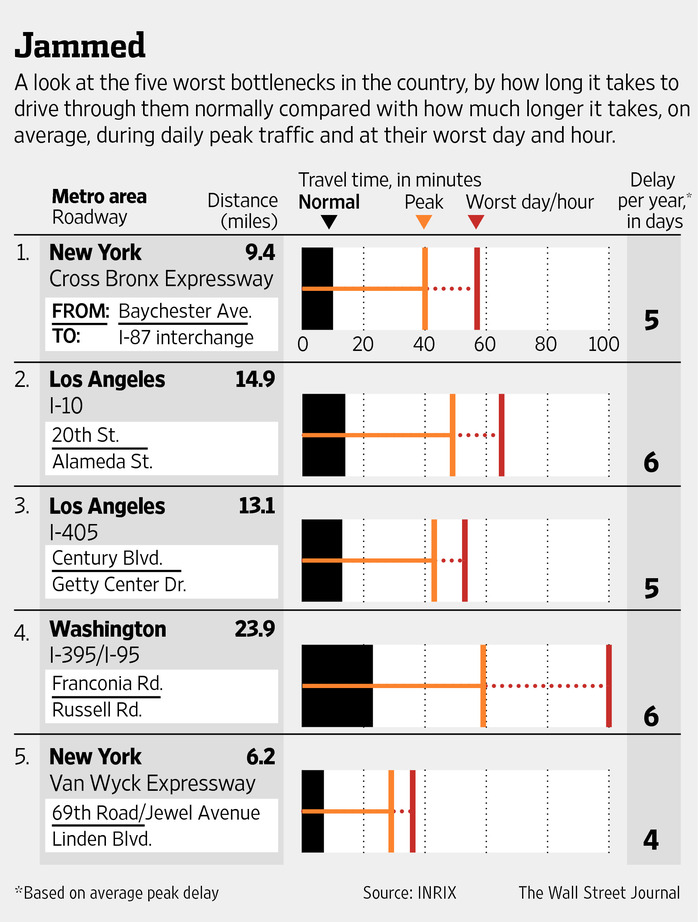 Ideally, drivers should maintain a steady slower speed, avoid unnecessary lane changes, which induce braking, and lengthen the gaps between vehicles to allow for adjustments. But left to their own devices, drivers are more likely to jockey for position. Some change lanes or race forward to cut in line. Others counter by tailgating or straddling lanes.

Mr. Rakha compares it to pouring sand through a funnel. “If you pour sand suddenly, not as much goes through as if you pour exactly the amount the funnel needs,” Mr. Rakha said. “There is more throughput by pouring less into the funnel.”

“You end up with stop-and-go congestion,” Mr. Arseneau said.

Minnesota uses the zipper merge, often in work zones when a lane is dropped, and the technique is taught in the state’s drivers education manual. Zippering doesn’t hasten traffic, but it makes merging more orderly, and it significantly reduces queue lengths.

“The length of the backup gets reduced by up to 40%,” said Ken E. Johnson, a traffic engineer with the Minnesota Transportation Department.

Variable speed limits slow vehicles before they begin to queue. Georgia, for example, recently implemented variable speeds on I-285 in Atlanta to reduce congestion. There, depending on road conditions, the speed, posted on electronic signs, may vary from 35 mph to 65 mph.

Ramp meters keep freeway traffic moving by controlling the volume of merging traffic. In 2001, Minnesota turned off 430 ramp meters for six weeks and studied the effect. Among other things, the researchers found that freeway volume decreased by 9% and travel times increased by 22%.

“We know if we can delay congestion from occurring and slow traffic down, that will prolong the free flow and get more vehicles through,” Mr. Arseneau said. “You want to make sure you keep that traffic flowing as long you as can.”

It is a tall order that the engineers acknowledge is counterintuitive.

“We’re telling them to slow down to reach their destination faster,” Mr. Rakha said. “It’ll be hard for the driver to recognize that.”